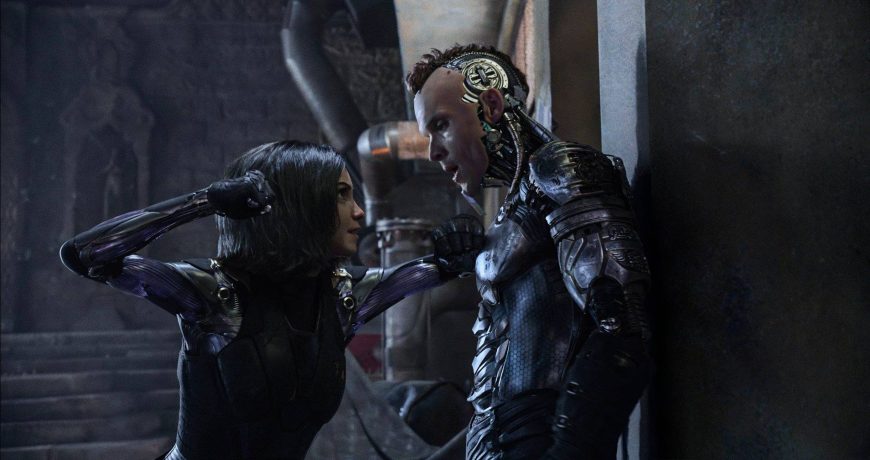 I don’t usually let my geek flag fly. I dunno why, I’m just pretty quiet about the things I’m a fan of. I love them hard, but you have to see me in person to really realize how much I enjoy them. However, I am breaking that silence with Alita: Battle Angel.

I have loved this story since I found it in high school. I found a random image from the second half of the original series, and then found out who it was, and picked up the manga. I fell in love. The main character is a small, underestimated warrior with immense power and skill, who frequently takes out people so much larger than she is. She’s got a sharp tongue, good instincts, and never gives up. It’s a story about what makes you human, paired with incredible action and incredible characters.

James Cameron’s ambition and Robert Rodriguez’s flair for brutality combined with an excellent story by Yukito Kishiro seemed like something that would never happen. I was shocked when I first heard that James Cameron was considering making a movie out of Alita. I never thought it would happen. For years, every time I heard it mentioned again I would go and peruse the news, and settle back into disbelief. Japan couldn’t even get an anime of this story to go past two episodes. How the hell would Hollywood pick it up – much less, do it right?

However, I was still anxious and unsure and was afraid it wouldn’t really be her. It wouldn’t be Gunnm if they just grabbed the characters and the names and ran amok. Early showings were well received. Critics were confused by the anime-esque premise (duh) or claimed that there was no chemistry between Alita and Hugo (PERFECT, THAT’S THE POINT. THEY DON’T HAVE ANY.). However, they said it was the best Anime adaptation that Hollywood has done, and that gave me hope – that it would be well-received. It didn’t give me hope that it was the Alita I love. I have seen enough book-to-movie adaptations to even wish for it to be the same Alita.

I saw it last Saturday, for my birthday. I still can’t believe that I actually saw it. Even after it was over I still didn’t believe it. When the movie finished my head wasn’t even touching the back of my recliner.

It was amazing. It was wonderful. They stayed so true to the story, to the characters, to the rules, to the whole world. It wasn’t just the names, or the cameos, or the idea – they had the whole story. Even better, because they aren’t going to be able to reach Last Order plot-wise, they included things from it! Gelda was there. Ido was Ido. Vector was perfect. Chiren was great. Grewishka was right. Jashugan. Ed. I even liked Hugo! And, of course, Nova. They are making Nova do more than before, but oh, is he so diabolically true to himself.

And at the center of it all, that WAS Alita. There was no damsel in distress in this movie. There was the feisty, multi-dimensional warrior I love. She was naive, searching, hopeful, confident, vicious, and fiercely protective. She was everything Alita is. Rosa Salazar was perfect. Her world was perfect, her relationships, and her drive. Her memory returned faster, which is fine – because we got Michelle Rodriguez as Gelda out of it. We got hints of Mars. I only wish we could get Sechs of the Space Angels arc on this screen. Alas, that will not happen. (Or should I hope for that too?)

More than once I caught myself wondering if I was watching the anime or a movie. It was so true. As a movie, it ran. It flowed, things that moved from their original timeline made sense, and it was every bit as dark and fierce as it needed to be.

I need to go see it again. Even with the superhero movies I love, I don’t do that. I just wait for DVD. No, I need to see this again. I need another viewing to take it all in.

YOU need to go see it. There is more to this story than they told in this movie, and we need to make sure they tell it. The anime only made it this far. The anime never even made it to Motorball. Motorball is great – it’s a blast, and it pushes Alita so far – but Motorball is not the climax. She has more fights to fight, more adversaries to overcome, more bad guys to defeat, and more friends to find, love, and save. She has so much more growth in front of her.

We need Figure. We need Lou. We need Barjack. Kaos, Den. We need to see everything that happens with Nova and Zapan (oh, he was excellent), Ido, Kiyomi, Vector – and, of course, Alita.

And obviously, Nova needs to die. A few times. 😉

GO SEE IT. I beg you. Brave the snow and get lost in Iron City. It may be the only time Missouri ever looks cool.