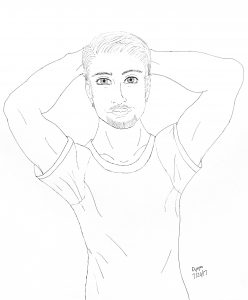 Dyspro’s carefree, comedic, and enjoys getting his hands dirty. He’s a general contractor – and has plenty of practice fixing both physical things and people, being as Cypha and Satyrna get into just as much trouble as he does.

He has three sisters (two younger, one older) and an older brother, and has been friends with Satyrna since they were born because their families have long been friends. He learned most of his handyman skills from his father, who also works as a contractor.