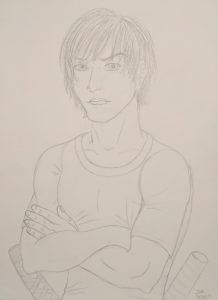 Josh is a third-generation knight, and as such feels a lot of pressure in his position. He doesn’t agree with his grandfather (the previous Head Knight) and his views on the law and people, and has worked to ensure that he isn’t compared to him. His mother is similar to him, and taught him many things before he joined the force – mostly about the politics and how to get through them so he could focus on the important part: defending the town. He has recently been promoted to the exclusive role of knight captain, and is considered a leader on the force. He is very loyal to Kalyfa because he understands Josh’s stance and loyalties and respects them, and Josh is hesitant to betray that trust. His family owns the knights’ castle stronghold, so major changes or renovations have to be approved by him.

Josh is also old friends with Dyspro, Satyrna, and Barry and their families. His relationship with Cypha is different than the others and is closer in a lot of ways. Dyspro frustrates him at times, because he doesn’t always understand Josh’s loyalties. Despite their conflicts, they remain fast friends. 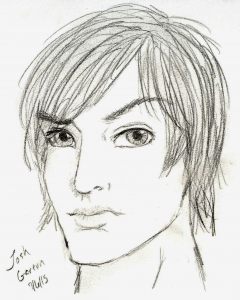 Sticking with our knight focus, next up is Josh! Josh was originally a minor character, but through his own personality, his established relationships, and his choice of career, he has become very important to the new version of the Division 53 story.

Josh’s birthday is February 26, 2016, making him the second youngest of his friend group after Satyrna (May 10). He is 6’ even, has blue eyes, and has dark brown hair that he wears loose and several inches long. He spends a fair amount of time training and keeping in shape, so he’s pretty strong and fast. He is incredibly private and doesn’t like sharing much about himself, and doesn’t date for numerous reasons.

Josh was always very focused academically and graduated with honors from Cavington High School, like Saty did, but did not pursue higher education afterward. He trained beforehand and immediately joined the knights after graduation. Satyrna, Dyspro, Barry, and Cypha were his best friends growing up, although he’s spent more time working than hanging out with them lately. Barry sees him more than anyone else, partially because Josh can get a meal he doesn’t have to cook while he’s hanging out with him. Cypha sees him slightly less frequently, but more than Satyrna and Dyspro.

Unlike most of the core cast, his whole immediate family is alive and together still. He’s the youngest of three kids in his family, but the second Garevn child. His parents, Steve and Olivia, live in Cavington. Olivia still helps train new knights, but is retired from active duty.

Josh is not only one of the youngest knights, but the youngest captain. He’s made it a personal goal to prove himself worthy of the position. He has absolutely no desire to take Kalyfa’s job because of the bad taste his grandfather’s influence has left in his mouth. All of the politics look like hell to him. His current plans after retiring from active knight duty is to train to become a detective for the police force so he can still challenge himself and enforce the law, but avoid training recruits and doing purely administrative work.