Kalyfa is the head of the Cavington Knights (the special police forces in Satyrna’s hometown) during the time of the Division 53 series. He is pragmatic, charismatic, and just. He takes crime-fighting seriously, and wants to protect every law-abiding citizen in Cavington, regardless of their circumstances. His intentions are good, but reality is much harder than idealities, especially because of the regime he inherited. At the very least, hangings are gone, darks are not being killed as ‘examples’, and the justice system is getting a chance to work. His job is hard, and made much harder when government agents show up and start messing with his authority, like Malkarai. 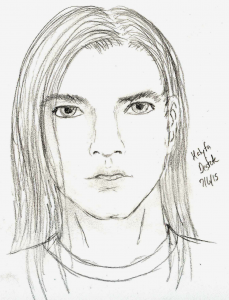 Leader of the Cavington Knights, antagonist of The Dark, and a begrudging ally of the main characters in The Haven, Kalyfa remains focused on justice and upholding the law. As long as Malkarai and Traphian follow the laws, he’ll remain an ally.

Kalyfa is tall – the tallest identified character in the series at 6’7″. He has shoulder-length blonde hair, blue eyes, is lean but strong, and wields a hand and a half sword – not the standard knight sword. He was born in 2009, so he’s a fair bit older than most of the other characters. Since Satyrna broke up with him he’s been single, and not looking.

As the head knight, Kalyfa works a lot. He has a lot of boring but necessary paperwork that he takes care of during the day, normally in the knights’ office in the Cavington courthouse. He also leads patrols several times a week and keeps an eye on training, special projects, and all the cases that fall in their jurisdiction. He is also the only member of the squad that liaisons with the Federal Government’s law enforcement agencies.

Underneath him are a handful of carefully-chosen and proven captains that serve as his constant contact with the rest of the squad. He has regular meetings and check-ins with these captains and trusts them to not only keep him informed but recommend and carry out discipline and commendations.

Kalyfa is the second head knight, after the founder, Richard Garevn, and was originally not intended to be long-term – although this was never explicitly stated, Kalyfa is quite smart and politically aware and could read between the lines. However, due to the success of the squad under his leadership, the resulting low crime rate of the town, the approval of the other knights, and Josh’s complete lack of interest in the position, he has had no contestation with remaining in charge, and will probably stay that way for a while.