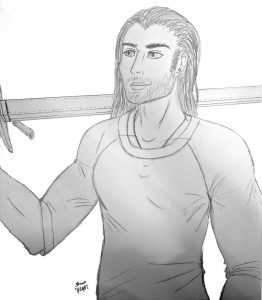 Shawn is clever, diplomatic, and conscientious. He likes kids and is pursuing higher education in addition to his training as an agent. He doesn’t leave himself much downtime, either studying or practicing when he’s not on duty. He prefers to spar Teffifa over anyone else because she actually presents a challenge, and usually hangs out with her and Swip. He and Arista were the first two to join Traphian and Malkarai’s generation at the North Western Agency. He is Irish-American and speaks with a slight accent – which he is capable of dropping or changing at will due to practice. His mother was Irish and died when he was seven. He kept his birth name, but chose a new last name when he joined the ASA.

He is first mentioned in ‘The Dark,’ but does not actually appear.