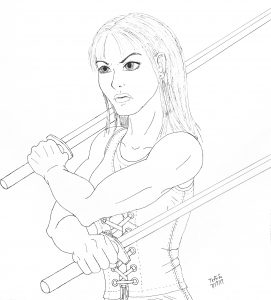 Teffifa is over the top. She lives in bold. She usually wields two swords that most people would consider two-handed all on their own, dyes her hair, and wears bright red contacts instead of clear. She doesn’t feel pain until long after the wound has been received, so she’s covered in scars. When she’s working she wears tough leather as a vain attempt to limit the damage, but mostly she just relies on winning the fight before she can get hit. She’s fierce, opinionated, quick-thinking, brutally honest, and incredibly loyal. Because her emotions are exaggerated, she prefers not to live with regrets – so even though she’s rough and abrasive, she’s a good person deep down.

She was the last person to join Traphian and Malkarai’s generation. She originally was recruited to the Southwestern agency, but they had too many traditional recruits at the time so she was sent north. She chose the name ‘Teffifa’ when she was recruited to the ASA, and the system offered the last name of ‘Ripper’ because of her genetic heritage. 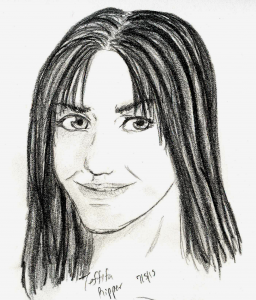