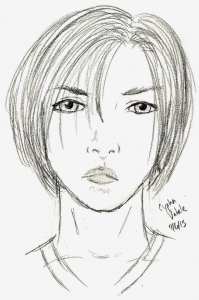 Cypha’s tough, independent to a fault, and hard-working. Surrender was never a word in her vocabulary (lots of words aren’t, actually). She’s very loyal and although quick-tempered, enjoys a good time and keeps her friends close. Satyrna calls her her first charity project – just not to her face.

She grew up mostly on her own. Her father abandoned her when she was four. She was found and sent to an orphanage, but she escaped and came back to Cavington. Even when she returned home she stayed on her own, scavenging and stealing food until she met Satyrna, who pressured her into going to school and cleaning up her act. While she still supports herself completely, she has a high school diploma and shares a cottage with Dyspro (and Satyrna occasionally) now.

Character Focus from the June 2019 Newsletter:

Writing about Cypha and not spoiling things that are explored later is going to be tough, so bear with me. Yes, I focus on Cypha later. 🙂 The Shield is going to focus on a lot of deep but neglected characters.

Cypha Vatale was born in Cavington to unwed parents. Her mother, who was seventeen, left when she was a baby, leaving her with her father. He mistreated and abused her and eventually abandoned her in a dumpster when she was four. When she was found she was sent to a children’s center out of town, and he was sent to prison. Cypha stayed in the child welfare system for a few years before running away and coming back to Cavington, where she lived on the streets, stealing food and other things. She became friends with two other kids that spent a lot of time not at home as well – Fayta and Martra Harakin (the two darks from the very very beginning of The Dark).

One day, she got caught stealing by another kid, Satyrna, who made her stay. She was quickly fostered and taken off the streets and put back in school, but she spent a large portion of her time avoiding home and wandering around anyway. She introduced her new friends (Josh, Satyrna, and Dyspro) to her old ones (Fayta and Martra), but it wasn’t long before the twins were caught stealing and executed as an example.

Her stealing mostly stopped after that, but she still has the street skills and generally just uses them to defend herself or mess with her friends these days. Immediately after high school she moved out with Dypsro to the cottage in the woods that he’d been tasked with fixing, and still lives there as of The Hunt. Cypha has a lot of issues and grudges but does not talk about them. She is proud and fiercely independent and hates to be babied.

She’s still really good friends with Josh and Satyrna, and Dyspro annoys her, but she’s friends with him too. Ever since Satyrna started spending most of her time with Malkarai, Cypha had started hanging out with Traphian and found that they had a lot in common and enjoyed each other’s company. If you read the bonus scene from the last newsletter, you know how that’s developed!